Included in our program are two snacks (morning and afternoon) and a hot-homemade lunch prepared by our in-house Chef each day. Each Snack consists of at least two food groups and Lunches always consist of all four food groups. Snacks and meals follow Canada’s Food Guide for healthy eating. Our proven methods have demonstrated the effectiveness of children eating the same meals as their peers and making the choice to try, eat, and enjoy things they normally wouldn’t. This program also allows you (the parents) to spend less time shopping and preparing lunches and snacks and worrying that they’re not getting enough nutrition at school, and more time enjoying your children! We will worry about the rest!

The Children are offered what is on the Menu – there is one meal option available. If you have specific eating requirements it is up to you to follow the posted Menu to determine when you need to bring an alternate meal for your child. Our Chefs are very willing to support you through this as much as they can!

We are a “Nut Aware” Facility, we do not serve nuts of any kind – we do our best to minimize “may contain” products. If your child has allergies to the things posted on the menu – please see above menu policy. Please ensure you do not bring any nut products into our centre to protect our students with allergies.

What is baby-led weaning? Essentially – it means weaning on to food or introducing food.

Babies learn by imitating us and often try to grab food from their plates. They are often much happier when they are allowed to feed themselves as their confidence grows from learning new things and establishing independence.

Since the 1960s the recommended age for introducing solids has moved from three to four and now six months, but the way in which we introduce solids is still geared towards a three-month-old. Parents traditionally wean their children on to single meats, fruit or vegetable purées or baby rice cereal, moving on to other pureéd foods as their babies become older, finally introducing mashed foods and foods containing small lumps after several months.

The Canadian Pediatric Society, in line with the research and guidelines of the World Health Organization now advises parents to introduce solids into their baby’s diet at around six months. At six months old, most babies have strong necks and can sit up if they are supported. Their hand-eye coordination has developed to the extent that they can reach out and start to grasp food and grip it in their palms.

Some experts believe that babies who are allowed to feed themselves by being offered a selection of nutritious finger foods can easily join in with family meals from the start and are less likely to refuse foods or become fussy eaters as they grow older.

At Building Blocks, all of our students are offered the same meal – for our youngest students it is presented as a developmentally appropriate ‘finger food’.

The following guidelines adhere to Ellyn Satter’s Division of Responsibility in Feeding:

Adults are responsible for what, when, and where children are offered food. We provide nutritious, regularly scheduled meals and snacks. Meals and snacks are an important part of our program day: 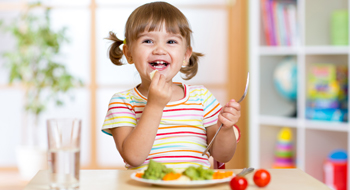 Children are responsible for how much and whether or not they eat. We trust children to manage their eating with respect to both amount and type of food. Children will eat what they need and will learn to eat new kinds of food. We encourage children to eat what is made available to them before dispersing seconds of a certain item – to avoid children eating three servings of starch and zero servings of vegetables.